BACK ON OUR VIGILANTE SHH AGAIN

It's National Sundae Day, but there is one thing sweeter than all the desserts, dear reader, and that is comeuppance. Our new design up top is a nod to that most beloved of chilled treats!
Not everyone's a fan, though. Someone recently (and angrily) demanded to know why we sometimes address rude comments we get from strangers on the internet. 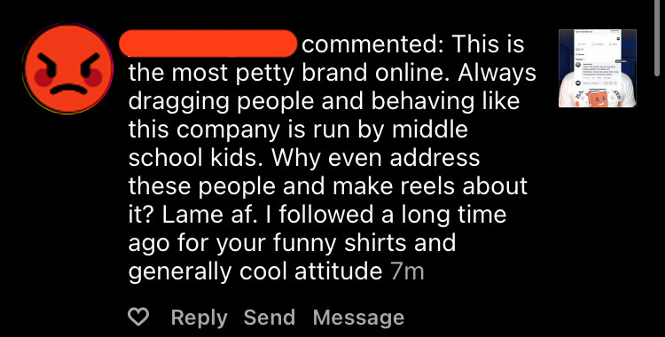 Please don't use "lame" as a slur when trying to make a point about who is acting out of pocket (or use it at all, really).
Entertainment value aside, the better question is "why shouldn't we?"

We all have those sh!tty childhood memories that affect who we are as adults, so here's a little look at my villiain origin story: I have this stubborn memory of an afternoon on the school bus with kids behind me blowing hundreds of spitballs into my long hair. I sat there silently, not feeling like I could do something about it at the time. So I arrived home with my hair covered in a huge gross mess.
Those kids deserved consequences. I hadn't done anything to them but they started trouble with me anyway, and that day the takeaway for them is they could start trouble with whomever they pleased and nothing bad would happen to them.
Of course things would go differently now that I'm not a helpless little kid. If I had a time machine I would go back and give those kids the thrashing they deserved, but alas, I do not. I can give people a verbal thrashing who ask for it in my comments section, though — and honestly, someone should anyway.
I bet those rotten kids from my youth are now the adults terrorizing the comment section, not just on Boredwalk posts, but all over the internet. No one ever made them regret their actions.
These people are likely a problem for their co-workers, families, retail staff, and generally anyone who has the misfortune of dealing with them. So many of the people in their path probably feel like they can't do anything about it.
From a purely crass marketing perspective, this content works well for us. It gets our content seen, it gets us followers, engagement, sales, etc. Anyone who generally wants Boredwalk to succeed would want us to do what works for our business, even if all of it isn't of interest to them personally. So when people comment that they like(d) our brand but chastize us for doing what works for us, I have to wonder how much of a fan they were to begin with. If you only like us when we do exactly what you want all the time, you don't particularly like us, so losing you isn't a real loss for us.
That said, these posts aren't just about marketing. They are about comeuppance. We live in a world that isn't fair, and most of us hate that. We want to see jerks given a reason to not continue their unacceptable conduct.

The reason most people enjoy our clapback content is because finally someone isn't gettting away with bad behavior. Someone's rotten behavior is being publicly shamed and they deserve it. I would happily live in a world where more people were publicly shamed for behaving badly. Who knows; maybe it would discourage it.
As for the public attitude towards vengeance, look no further than the wild success that is the most recent Taylor Swift album, where the theme of vengeance plays prominently.
She who sued a DJ for a dollar for grabbing her ass, because it wasn't about the money. It was about him being wrong and her making sure everyone knew it.
She who re-recorded her music to destroy the value of the original master recordings a slimy record exec purchased without her consent.
Love her or hate her, she's built a reputation as someone you don't want to cross, and I say good for her.
Speaking of reputation, we have an update about our latest copyright infringement lawsuit! If you want to get the dirt (we drop the name of who we sued) and hear our more invovled rant about the theme of vengeance, be sure to order your helping of vengeance.
*****
Alright! Let's wrap this up with a few famous birthdays and historical facts about November 11th:
• Born on this day: actress Demi Moore (1962), actor Stanley Tucci (1960), writer Fyodor Dostoevsky (1821), and writer Kurt Vonnegut (1922)
• On this day in 1926, U.S. Route 66 was established as a road running 2,448 miles from Chicago to Los Angeles
• On this day in 1925, Louis Armstrong and his Hot Five began their first recording session
• Finally, today is Veteran's Day, so shout out to any members of our military who may be reading. Thanks for your service!
*****
OK, that's it for this week! We'll be back here in your inbox on Monday with a fresh email and a fresh customer Q&A! If you'd like to be featured in an upcoming email reply to this and let us know!
Peace, love, and dressing for revenge,
Meredith
Share: