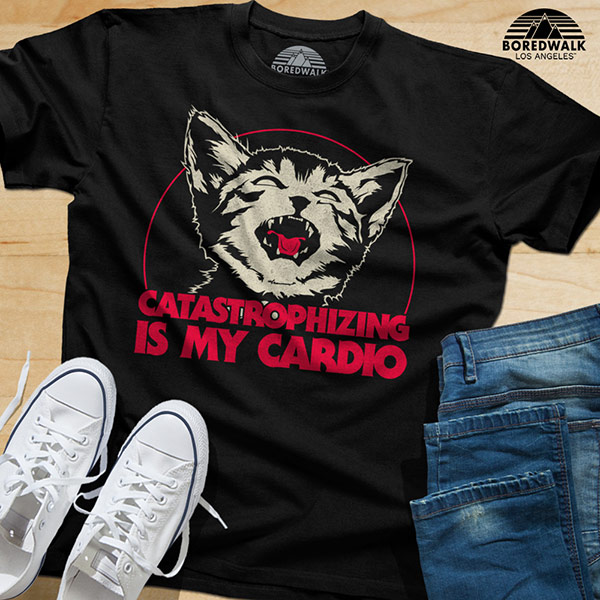 I'LL STICK WITH MY NEUROTIC CATERWAULER

Happy National Rat Catcher's Day! Surprisingly, Boredwalk does not have a tee design (or other product, for that matter) featuring a rat (yet), so in the spirit of the season I've decided to showcase a design featuring my favorite rat catcher: a cat.
Look at that adorably neurotic fuzzo! Catastrophizing is my cardio, too, little friend.
Apparently National Rat Catcher's Day is intended to commemorate the German folk tale of the Pied Piper of Hamelin. I prefer to imagine that it's more about paying homage to Charlie Kelly, King of the Rats.

Spoken like a true rat king.
Today is also National Penuche Fudge Day, which I did not know was a thing but now am desperate to try, and National Hammock Day. Unlike penuche fudge, I was previously aware of hammocks. I'm of two minds regarding the hammock:

• On the one hand, hammocks are incredibly comfy to lay in

• On the other hand, it's a good thing they're so comfortable, since actually getting into one is incredibly challenging
Alright! Other than a bunch of horrific war-related stuff, not much happened of historical note on July 22nd other than the kingdoms of England and Scotland agreeing to the Acts of Union in 1707 that joined the two, thereby leading to the creation of the Kingdom of Great Britain, which Scotland has seemingly regretted ever since.
However, there are a TON of notable July 22nd birthdays! If today happens to be yours, too, I hope it's a happy one! Other cake consumers today include:
• Painter Edward Hopper of Nighthawks fame (1887)
• Fashion designer Oscar de la Renta (1932)
• Actress Louise Fletcher, who played Nurse Ratched in One Flew Over the Cuckoo's Nest and Kai Winn on Star Trek: Deep Space Nine (1934)
• Actor Terence Stamp, who portrayed General Zod in Superman and Superman II and Bernadette Bassinger in The Adventures of Priscilla, Queen of the Desert (1938)
• Late Jeopardy! host Alex Trebek (1940)
• Musicians Estelle Bennett of The Ronettes and George Clinton of Parliament/Funkadelic (1941)
• Writer S.E. Hinton of The Outsiders fame (1948)
• Actor Willem Dafoe, who is probably a lovely man but sure seems batsh!t insane in virtually every role he's in (1955)
• Singer-songwriter Rufus Wainwright (1973)
• Pop star turned actress Selena Gomez (1992)
Finally, pour one out for actress Estelle Getty, aka Sophia Petrillo of The Golden Girls, who shuffled off this mortal coil on this day in 2008.
*****
OK, that's it — you made it to the end of this email! Huzzah! I hope that it has helped springboard you into a wonderful (or at the very least, mildly tolerable) weekend.
We'll be back here in your inbox on Monday with (hopefully) a fresh customer Q&A, more notable birthdays, and witty banter in general. Don't miss it! Until next time...
Peace, love, and fudgy hammock lounging,
Matt
Share: