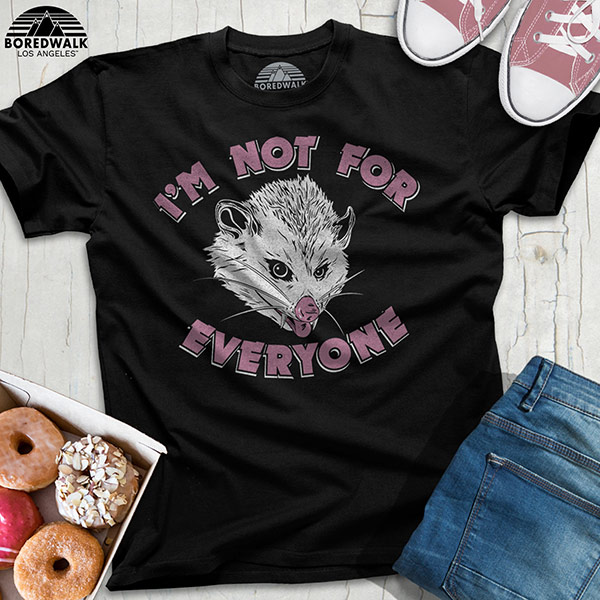 Happy Independence Day! Assuming, of course, you reside in the U.S.

While I admit this is presumptuous, it's also logical, since we don't run ads outside of the U.S. and I don't know how you would have discovered Boredwalk otherwise. Astral projection, perhaps?

Or maybe you hitched a ride of the back of a friendly opossum? A human piggybacking on a opossum is about as likely as traveling astral projection, so you can't really discount either possibility.

Now, you may ask yourself "how do I work this?" "why are you featuring a design about opossums on Independence Day, Matt?" This is a great question with a circuitous answer, so stay with me...

Today also happens to be National Hillbilly Day, and hillbillies historically have a reputation for sticking to their rural Appalaichan stomping grounds in the inland parts of the mid-Atlantic region. They also are big fans of nature, bluegrass music, and generally marching to the beat of their own drum — all of which tend to be acquired tastes, not unlike appreciation for (wait for it) opossums, who, like hillbillies, are also predominantly found in the eastern half of the U.S.

After reading this email, opossums be like "I'm both patriotic AND classy AF? Who knew?!?"

Today is also National Caesar Salad Day! I don't really have much to say about Caesar salad except the following:
• Caesar salad is one of Boredwalk co-founder Meredith's favorite salads.

• It is not named after an Ancient Roman emperor; rather, it is named after its creator, Caesar Cardini, who immigrated to the U.S. with his brother Alex, and they first served it in their restaurant in Tijuana, Mexico in 1924. Why did they open their restaurant in Mexico if they immigrated to the U.S., you ask? Because opening a restaurant in the U.S. during Prohibition was probably a good way to go out of business pretty quickly. Resourceful immigrants are about as American as apple empanadas and should be welcomed with open arms, especially because it's difficult to hold onto a bowl of delicious Caesar salad if your arms are folded.
• Opossums seem like they'd be down to munch on some Caesar salad. Don't tell me that majestic marsupial won't chow down on some croutons! Get crou-tingly with it, opossum pal!
*****
Alright, let's talk history!
• On this day in 1881, Tuskegee University was established. It was led for many years by Booker T. Washington, was the home of George Washington Carver, and also the alma mater of WWII heroes the Tuskegee Airmen.
• On this day in 1939 Lou Gehrig publicly announced his retirement from baseball after recently being diagnosed with ALS. He made his announcement at Yankee Stadium in front of thousands of adoring fans, telling them he considered himself "the luckiest man on the face of the Earth" for having been able to play for them for as long as he had. His record of 2,130 consecutive games played earned him the nickname "Iron Horse" and stood unbroken until 1995.
• Happy birthday to cartoonist Rube Goldberg, born this day in 1883! If you're unfamiliar, Mr. Goldberg was a sculptor, engineer, and inventor who rose to fame for drawing cartoons of convoluted contraptions designed to accomplish simple tasks. The board game Mousetrap and the opening scene of Back to the Future probably would not exist without Rube Goldberg.
• Today marks the stage debut of playwright Neil Simon's life, which began today in 1927. I'm not a musical theatre guy, but I'm told he's kind of a big deal.
• Finally, happy birthday to the human embodiment of regrettable tattoo choices Post Malone, born this day in 1995. I mean, I would find them regrettable. Maybe Post doesn't. They seem to be working out OK for him so far, so what do I know?
*****
Wrapping up, ICYMI in Friday's email you'll want to check out the newest video our content creator team has shared over on Boredwalk's YouTube channel. It's pretty funny!

Alright! That does it for this email, but if you're hungry for more — and why wouldn't you be? — scroll on down to learn a bit about fellow Boredwalk fan Leah W.! If you'd like to be featured in an upcoming Monday email, just reply to this and let us know, and I'll send you some fun questions to answer AND my undying gratitude!

We'll be back here in your inbox on Wednesday with some more random holidays to observe, historical tidbits to acknowlede, and fun links to entertaining content! Until next time... Leah looking both captivating AND intimidating with a selection from her Hell Goddess towel set!

1. What keeps you up at night?

Nothing. I sleep incredibly well.

(Editor's note: Must be nice! I'm over here trying to knock myself out every night with some combination of bourbon, ind!ca, and Bob Ross re-runs just to get the bare minimum 3-4 hours I need to be somewhat functional each day.)

2. What's a book you think the Boredwalk community should read?

I think the Boredwalk community should read *my* book, Taliswomen. Unfortunately it's not out yet, so they'll have to wait for that (but they can read excerpts!)

In the interim, I think they should read Discover Your Dharma: A Vedic Guide to Finding Your Purpose by Sahara Rose. It's a life-changer.

3. What is something you wish you could go back in time and say to your younger self?

I'm actually creating a series of video messages to my younger self in the hopes that they might help someone else, so I've thought about this quite a lot. I'd tell her, "Trust yourself and protect your energy. YOU are the one you're going to spend every second of your life with, so you better figure out a way to love yourself madly."

4. What is a surprising fact about you?

I have never watched a Star Wars film and am determined that I never do.

(I can respect that. There are actually three very popular sci-fi television franchises I've never watched a single episode of. First person to reply to this email correctly guessing all three wins a free t-shirt!)

You can find many iterations of me here.